The riddle that is Nigeria’s inability to carry success at youth level over into the seniors has remained impossible to crack since the Golden Eaglets won the very first edition of the Under-17 World Cup in 1985. Four further triumphs at that age grade have followed, but the world’s most populous black nation remains incapable of making a real splash in the big one: the World Cup.

This incongruity has led to a lot of conspiracy theories and conjecture, much of which centre around the thorny matter of cheating. While suspicions regarding age falsification have never been proved conclusively, the sheer and unabashed physical advantage enjoyed by Nigeria youth internationals over their foreign counterparts has understandably led to some sneering scepticism.

Pull up a video of the final of the 2007 edition of the Under-17 World Cup, and the contrast between the late Yemi Tella’s Golden Eaglets and their Spanish opponents is impossible to miss. Yet, with no proof of wrongdoing, it is impossible to speak with any certainty.

Our cause has also not been helped by the fact that, traditionally, there has not been much organic progression in terms of personnel from the cadet teams up to the seniors. Of that aforementioned 2007 group, only Haruna Lukman has featured for the Super Eagles at a major tournament: the 2010 World Cup.

However, recent times have seen that trend bucked considerably. The 2009 Under-17 World Cup silver-winning side, on home soil, proceeded to make an impression at senior level. Ogenyi Onazi and Kenneth Omeruo were part of Nigeria’s triumphant Africa Cup of Nations-winning side in 2013, under the late Stephen Keshi, and they starred at the World Cup in 2014 along with Ramon Azeez. Olarenwaju Kayode, on loan to Girona from Manchester City, recently made his senior international bow.

The crop of 2013 have now begun to assert themselves as well, with Kelechi Iheanacho, Success Isaac and Wilfred Ndidi (even though he missed out on the tournament proper in the UAE) all fully fledged Super Eagles. Even Victor Osimhen, top scorer at the 2015 World Cup, has gotten a couple of looks into the team, even if only for the purpose of blooding him in.

The recent tour to Morocco by the national Under-15 team is set to continue this revolution. As part of the programme of the Nigeria Football Federation’s Youth Development Committee, headed by NFF First Vice President Seyi Akinwunmi, the boys were selected mainly from the South-West regional Under-15 qualifying competition in Sagamu, and the National Under-15 Football Championship in Abuja in 2016.

This team lost one and drew one of their two games against what officials considered to be a combination of Morocco’s Under-16 and Under-17 sides, and have drawn many admirers. Crucially, when their photos were published online, there was widespread commendation, an acknowledgement that this set actually look the right age. In a nation like Nigeria, so easily polarised along lines of opinion and sentiment, who knew such a day would ever come?

Props must go to the NFF, grassroots coaches and scouts, and to Mr Akinwunmi, who is adamant that the future of a successful national team lies in the youth. Indeed, there is something warming in their moniker: ‘Future Eagles’; if they do indeed make the step up (obviously not wholesale, perhaps 10, maybe as little as five even) then there can be no argument that this will have been an unqualified success on every score.

Also encouraging is the knowledge that these kids are mixing the football up with their formal education. As earlier acknowledged, not every one of them will make it through; only the very best will be gleaned, and on that score, there are already some standout performers: defender Egbu Chukwuemeka is the captain of the side, and along with him we may soon be serenading the likes of Lawal Sulaimon, Egesionu Sopuru and the improbably-named Hitler Eniye. However, for most, the star of the side is Toheeb Muritala, an attacking midfielder capable also of playing on the left.

What this idea with the Under-15s gives us is a crucial element that has been missing this entire time: transparency. Instead of picking players fully-formed out of academies, the next Under-17 side now have a credible base to work with. The organic method is not always the most instantly gratifying, but its fruits stand the test of time.

As a legacy, it is a quite impressive one by the NFF

The six-man committee chaired by Mrs. Joke Silva, MFR, is expected to draw out suggestions and recommendations on…
byTayo Aderinola
No comments

The UEFA Men’s Player Of The Year Goes To C. Ronaldo, Thanks Teammates On Instagram

Real Madrid Star, Cristiano Ronaldo has won the UEFA Men’s Player of the Year for a second consecutive…
byTayo Aderinola
No comments 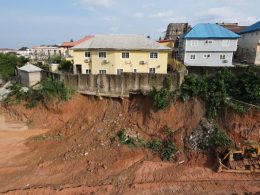 The Lagos State Government has warned against indiscriminate excavation of Magodo wetlands, saying it portends danger to lives and property.
byLateef Idris
No comments