The Eko Electricity Distribution Company (EKEDC) on Saturday warned against attack on its staff, who are on lawful duty within their network areas.

EKEDC’s General Manager, Corporate Communications Units, Mr Godwin Idemudia, in a statement in Lagos said the warning became necessary as some of their customers are mobilising against their staff on lawful duty.

Idemudia said that recently the police had charged one Waheed Ayanshola of Opeloyeru Street, Doyin, Orile, Lagos, to court on June 22 for assault on one of EKEDC staff.

According to him, the case is before an Ebute Metta Magistrate court, Lagos.

Idemudia, however, warned that anyone caught assaulting the company staff would be made to face the wrath of the law.

The company had in May decried the spate of violent attacks on its workers while on lawful duties.

It said that their workers had been attacked by people claiming to be protesting against epileptic power supply.

Nine months after she was brutally murdered , the Special Anti-Robbery Squad in Ondo state has arrested four…
byTayo Aderinola
No comments 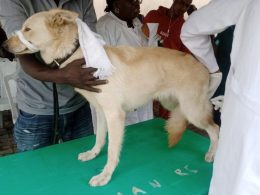 28th September is a day set aside to observe the World Rabies Day but Lagos State Government as a proactive government is not waiting till September to give priority to animals especially Dog which is globally acclaimed as the best friend of man among all the animals.
byLateef Idris
No comments

The Tijaniyah, a Sufi order, has appointed a former Emir of Kano Muhammadu Sanusi II as the new Caliph in Nigeria.
byLateef Idris
No comments