The Lagos State Police Command has denied reports making the rounds on the internet that Damini Ogulu, known by stage name Burna Boy has reported to the police for questioning.

In a statement, the command’s Public Relations Officer, ASP Olarinde Famous-Cole said Burna Boy is yet to report himself to the police and still on the run.

Burna Boy is accused of masterminding an attack on his fellow musician, Mr 2kay at the Eko Hotel last month.

The police spokesman said Samuel Ogulu, Burna Boy’s father, who visited the Investigating Police Officer (IPO) in-charge of the case has promised to produce his son.

Read the police statement below:

The Lagos state Police Command would like to inform members of the public that Damini Ogulu a.k.a ‘Burna Boy’ is yet to report himself to the police and still on the run contrary to reports making rounds on the internet that the musician has honoured police invitation.

The command would also like to inform the public that only Burna Boy’s father, one Samuel Ogulu visited the Investigating Police Officer (IPO) in-charge of the case with the promise to bring Burna Boy before the police.

The Command however uses this medium to urge Burna Boy’s father and relatives to do right by bringing the musician and turning him in to the police before the long arm of the law catches up with him. The command assures that justice will be done.

Multiple reports indicate that  Oba Idowu Abiodun Oniru, the paramount ruler of Oniruland has gone to join his…
byTayo Aderinola
No comments 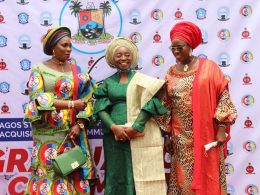 The Lagos State Government, through the Ministry of Women Affairs and Poverty Alleviation (WAPA), has empowered 225 military officers' wives in a short-term skills acquisition programme as part of a women emancipation process geared towards economic growth.
byTayo Aderinola
No comments

Ijedodo-Ijegun Residents Protest in Alausa, Ask Sanwo-Olu To Save Them From ‘Omo-Onile’

Residents of Ijedodo and Ijegun areas of Lagos State on Monday embarked on a peaceful protest in Alausa, asking Governor Babajide Sanwo-Olu
byTayo Aderinola
No comments