The Presidency said President Muhammadu Buhari has demonstrated his fitness to run for a second term by trekking 800 metres from the Eid-praying ground in Daura to his private residence.

The News Agency of Nigeria (NAN) reports after the Eid-prayers, President Buhari shunned protocol and opted to trek some 800 metres, acknowledging cheers from Nigerians, who lined up on his home route to catch a glimpse of him.

One of the aspirants interested in the president’s office is Gov. Aminu Tambuwal of Sokoto state. He said last week that President Buhari is “too old’’ to continue to rule the country beyond 2019

According to Tambuwal, President Muhammadu Buhari is too old to be Nigeria’s leader, despite his integrity and impeccable character. Tambuwal stated this during a solidarity visit of students and youth in Sokoto, last week.

Tambuwal said: “We love President Buhari and that was why we supported him in 2015 unconditionally, and while doing that, we are too sure that he will seek re-election after his first term, but when things are wrong we have to tell him.

“We still believe in his integrity, patriotism and courage but these are not enough for a leader.

“We all know that there is a vacuum in the government occasioned by his disposition probably because of his old age or health condition.

“That is why Nigerians are yearning for younger ones to lead this country.’’

However, Malam Garba Shehu, the President’s Senior Special Assistant on Media and Publicity, said the trekking by the president was a positive response to Tambuwal’s diatribe.

“I think there are two things here; one is to say that the President is responsive to the enormous support and commitment of his own people that had come out in their numbers to see him and he just decided that he couldn’t go on riding in a black vehicle and he came out and walked to the distance.

“The second thing, he is curious that these days, one or two people who are aspiring to be president are campaigning on their youthfulness and good health.

“I think that if people want to campaign against him they should do so on issues that are of significance to Nigerians. The President is fit, he is healthy; he is good to go for second term,’’ he said. (NAN)

At least 301 Chinese citizens have returned home from Nigeria. The nationals were evacuated on Thursday night through…
byTayo Aderinola
1 share
1
0
0
No comments 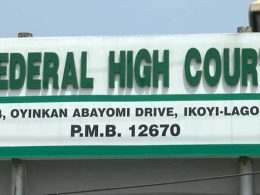 A Federal High Court sitting in Lagos on Thursday sentenced a former Permanent Secretary in the Ministry of Labour and Productivity, Dr Clement Illoh Onubuogu, to four years imprisonment on three counts each of non-declaration of assets.
byLateef Idris
No comments