President Muhammadu Buhari has warned that the government would no longer tolerate the attacks by suspected herdsmen and other bandits.

Buhari who was on official visit to Nasarawa state, frowned at what he described as “unwarranted killing of innocent citizens’’.

He said the government was working hard to instil peace and stability and enjoined Nigerians to resist the temptation of engaging in reprisals.

The President spoke on Tuesday at the inauguration of Comprehensive Special School, Lafia, Nasarawa State.

He sympathised with victims of reported attacks and urged them not to engage in reprisals.

He reassured the people of North Central that the Federal Government had put in place, adequate measures, to end the crisis and maintain law and order.

“I also want to assure the people of the north central and indeed all Nigerians that the federal government is working day night to ensure peace and stability returns.

“We have deployed additional resources to all the affected areas to maintain law and order.

“I appeal to all Nigerians to refrain from reprisal attacks. The security agencies have standing order to arrest and prosecute any and all persons found with illegal arms

“I will once again express my condolences and sympathy to all the affected victims of these barbaric acts,’’ he said.

The News Agency of Nigeria (NAN) recalls that border communities along Benue and Nassarawa states have been witnessing social unrest occasioned by farmers/herdsmen clashes resulting in killings of innocent citizens in both states.

It would be recalled that such barbaric killings took place on Jan. 1 where suspected herders attacked villages in Logo and Guma local government areas of Benue with over 73 people murdered.

The killings of the 73 people had spilled into violent reprisals with seven travellers believed to be of Fulani extraction were killed and their corpses roasted by rampaging crowd believed to be criminal elements in the society.

Buhari on Tuesday arrived in Lafia, capital of Nasarawa state, for a state visit and to commission some projects.

The president was received by the state governor, Tanko Al-Makura; Plateau State governor, Mr. Simon Lalong; and Deputy Governor of Benue state and other dignitaries.

Some of the projects to be commissioned are Lafia Comprehensive Special School; Comprehensive Primary Healthcare Centre in Kwandere; Muhammadu Buhari International market, Karu.

Ahead of the visit security personnel have been deployed in major streets.

The police and other personnel of other security agencies have been stationed in strategic locations.

They were also stationed in some towns, including Akwanga, Keffi and Karu.
(NAN)

U.S allocates an additional $75 million to fight HIV/AIDS in Nigeria 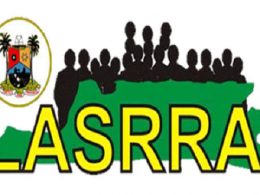 The Lagos State Government has concluded plans to roll out the New Lagos Identity Card, “LAG ID” for residents of the State.
byLateef Idris
No comments 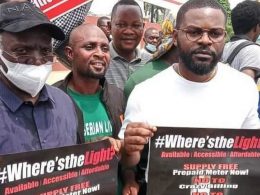 Human rights lawyer, Femi Falana (SAN), and his musician son, Folarin, aka Falz, along with scores of Lagosians took to the streets on Monday to protest against the insecurity and poverty ravaging the country.
byLateef Idris
No comments