For taking undue interest in the primaries of All Progressives Congress (APC), the opposition Peoples Democratic Party (PDP) has conceded defeat in 2019 elections.

“The APC is amused by the interest the PDP has in the mode of primary election we adopted to elect our party candidates for the 2019 elections.

Mr Yekini Nabena, APC’s National Publicity Secretary, on Sunday in Abuja accused PDP of showing and taking undue interest in the mode of primaries the APC adopts to elect its candidates for the elections.

“With over 13 million registered APC members, coupled with a large section of non-partisan Nigerian electorate supporting the President Muhammadu Buhari-led APC administration, it would seem that the PDP, on account of its attack of APC’s adoption of direct primaries, particularly to elect its presidential candidate, has already conceded defeat even before the 2019 elections.

“We quite understand that the revolutionary and progressive idea of direct primaries to elect party candidates is strange to the PDP,” he said.

According to him, PDP is a party known for its inability to ensure internal party democracy, and it actively promotes imposition of candidates against the will of its members.

He added that the direct primaries, among other things, ensure fairness; creates a level playing ground for contestants and eliminates corrupt tendencies usually associated with the delegates system.

The spokesman also added that the direct primaries ultimately ensure full and direct participation of party members at all levels in the election of party candidates.

He maintained that the APC is a progressive party and would continue to implement the change agenda it promised to Nigerians.

Nabena urged Nigerians to continue their support for Buhari as he continues to rebuild and re-position the country.

The News Agency of Nigeria (NAN) reports that the APC National Executive Council (NEC) at its recent 6th meeting, resolved that primary elections into all elective offices shall be by direct primaries. (NAN) 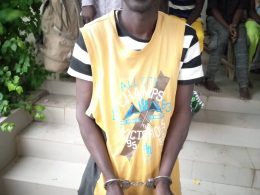 The Police in Katsina State on Friday succeeded in rearresting another fugitive suspected to have escaped from Kuje Prison, Abuja.
byLateef Idris
No comments