Another PDP stalwart defects to APC in Lagos

A Chieftain of the People’s Democratic Party (PDP) in Oshodi Local Government, Lagos State, Chief Remi Adiukwu on Tuesday defected to the ruling All Progressives Congress (APC) with thousands of her followers ahead of 2019 General Elections.

Adiukwu, a former commissioner in the state said that her defection was motivated by the sterling performance of Gov. Akinwunmi Ambode and the foundation of the ruling party.

“I am back in the party, when I say I am back, I am actively back. I am enlightened now.

“Election is coming, we will do it with all our strength to deliver back to the party all the slots and mandates we took from APC to PDP during the 2015 election.

“PDP is now dead in this council, no more opposition. This council is completely for APC now. I pledge my loyalty.

“My sojourn away from the party was based on principle just as my return today is encouraged today by the same principle of supporting only good things that will be beneficial to Lagos,” she said.

The Chairman of APC in Oshodi Local Government, Alhaji Olamide Kasali said that the ruling party knew the weight of the defector and the challenge she gave the party in 2015 elections.

“She is the bedrock of opposition in the council,” Kasali said as he presented APC flag to the defector.

According to him, with Adiukwu’s defection. the fear of APC during elections has gone as the development marks an end to the opposition in the council.

The Executive Chairman, Oshodi LG, Mr Bolaji Muse-Ariyo said that the defection would make things easier for the council during elections as he presented a broom, the APC symbol to Adiukwu.

Presenting the Party’s Constitution to the defector, Olusola Sokunle, representing Oshodi/Isolo Constituency I in the Lagos State House of Assembly said that Mrs Adiukwu was behind his election to the House in 2015.

“I am happy because the PDP stalwart we are accepting today into the APC happens to be my political mother. I was not happy that she was still in PDP when I moved to APC.

“This development has cancelled the existence of other political parties in Oshodi LG. Now that Chief Mrs Remi Adiukwu is with us, there is no more opposition in Oshodi LG,” Sokunle said.

According to Sokunle, who has also defected from PDP to APC in the House, without Adiukwu, he will not be in the House as a lawmaker representing the constituency.

Alhaji Musiliu Akinsanya, a chieftain of the APC in the council described the defector as a strong opposition in the council, commended Asiwaju Bola Ahmed Tinubu, the National Leader of APC for his forgiving spirit.

The event, held at Oshodi, had several party chieftains and hundreds of party supporters in attendance. 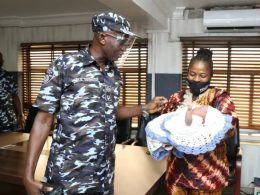 The Lagos State Police Command today 14th May, 2021 at about 8am, rescued another one month old female child that was abandoned at the junction of Odun-Ade Filling Station by Orile Bus Stop, Lagos.
byTayo Aderinola
No comments

The Chief of Staff to the Lagos State Governor, Mr. Tayo Ayinde has assured members of the Nigerian Institute of Public Relations (NIPR), Lagos State Chapter, of the present administration's commitment to collaborate with the body in propagating the T.H.E.M.E.S. Agenda of this Government.
byTayo Aderinola
No comments

Alausa gets new Baale after 13 years of vacuum