Wife of the Lagos State Governor and founder, Hope for Women in Nigeria Initiative, HOFOWEM, Mrs Bolanle Ambode on Tuesday flagged off the distribution of 50,000 shoes and branded socks for primary one pupils of public schools across the state.

Mrs Ambode flagged off the distribution at the Cherubim and Seraphim Primary School, Lagos Road, Majidun in Ikorodu. The distribution is the 2018 edition of the “Project Bright Steps,” a pet project of HOFOWEM, to boost the morale of the children and sensitize the society that the welfare of pupils is important, in getting the best of them in their academic pursuits.

In the first edition of Project Bright Steps in February last year, 175,000 shoes and HOFOWEM-branded socks, were distributed to all primary 1 – 3 pupils of public primary schools across Lagos State.

Flagging off the distribution, Mrs Ambode said getting the best from education began with proper dressing to school, saying that the foundation had observed with some pain, that many pupils were less than properly dressed to school, as some turned up in bathroom slippers while many others went barefooted.

The First Lady stated that this sort of daily appearance for school activities certainly could not guarantee them the desired self-esteem, for confidence to excel in their academic work.

“Our Foundation had pondered this and settled on the mass procurement and distribution of shoes and socks to the pupils, at least to prepare them for school. By the grace of God, upon the huge success recorded in the first edition, we are flagging-off the second edition of the project today, with a plan to distribute no less than 50,000 shoes and branded socks, to the primary one pupils of public schools across the state.

“The distribution centres are: Agege, Maryland, Yaba, Ojo, Amuwo Odofin, Epe, Lagos Island and Ikorodu which doubles as the flag-off venue. This arrangement is for easier accessibility to the various schools and the benefitting pupils,” she disclosed.

Mrs Ambode noted that Project Bright Steps was planned as an annual event, and would continue as such, by God’s grace, to touch as many pupils as possible in the state’s public primary schools.

Thanking all public-spirited individuals and corporate bodies, who had assisted HOFOWEM in its humanitarian endeavours, she urged the pupils to be serious with their academic work and that they should not make excuses of challenges and limitations.

“You can learn something new every day, if you listen attentively in class. And with strong determination, you can overcome all barriers to achieve your desired dream. Keep your eyes on the stars and your feet to the ground, do small things, in great ways. It is about your attitude of mind,” she counseled the pupils.

Chief Executive Officer, CEO, HOFOWEM, Mrs Oyefunke Olayinka said since the commencement of operations, the foundation had touched the lives of many and is still putting smiles on the faces of the less-privileged without wavering, adding that through the foundation’s various humanitarian programmes, hundreds of women, children and youths had been reached.

She said the Project Bright Steps was a programme aimed at increasing school attendance by equipping pupils for school, thereby serving as a means of support for indigent parents, who might find it difficult to provide the basic school needs, required by their children and wards for enjoyable schooling.

“Parents and guardians should know that anything worth having does not come easy. All hands must be on deck, backed by prayers to achieve our most ambitious goals for our children,” she said, while charging the pupils to put in their best in everything they set out to do.

Speaking at the event, Chairman, State Universal Basic Education Board, SUBEB, Dr. Ganiyu Sopeyin said the distribution of the shoes and socks would take place in all 1,016 public primary schools across the State.

He said last year, pupils in primary one to three benefitted from the distribution in 1,010 primary schools.

Commending the First Lady for the gesture, Sopeyin added that the exercise was a testimony that the present administration’s clarion call to Non-Governmental Organisations, NGO, was yielding the needed synergy between government and well meaning Nigerians to raise the standard of basic education in the State.

Permanent Secretary, Ministry of Education, Mrs Elizabeth Adekanye described the project as laudable and a step in the right direction to provide quality and accessible education to pupils in Lagos State Primary Schools.

“The First Lady has a burning desire to touch the lives of the less privileged in the society. She is everywhere assisting the indigents. This initiative is continuous all through the year,” she said.

A representative of the parents, Mr Ajayi Ajibola commended Mrs Ambode for the gesture, as it would relieve parents the burden of providing shoes and socks for their wards. 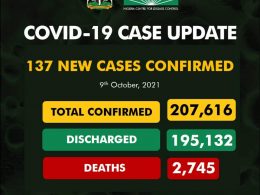 On the 9th of October 2021, 137 new confirmed cases and 2 death was recorded in Nigeria
byLateef Idris
No comments 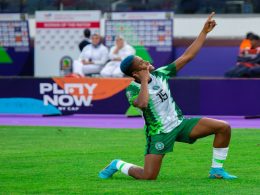 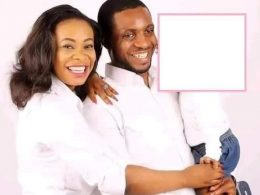 Lagos couple to know fate July 7 over death of housemaid

Justice Oyindamola Ogala of a Lagos State High Court in Ikeja has fixed July 7 to deliver judgement in the trial of a couple, Stephen and Fortune Nwankwo, who are accused of the murder of their housemaid, Joy Adole.
byTayo Aderinola
No comments 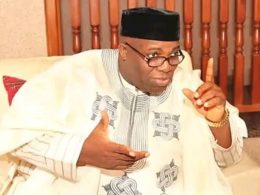