The National Leader All Progressives Congress, APC, Bola Tinubu, on Saturday warned against attempts to break Nigeria into smaller pieces, saying it was important to restructure the nation.

Asiwaju Bola Tinubu, a former governor of Lagos State, argued that there are numerous benefits Nigeria and her people would enjoy if the nation was restructured to create balance.

“It would be better to restructure things to attain the correct balance between our collective purpose on one hand and our separate grassroots realities on the other,” Mr. Tinubu said.

He spoke as Keynote Speaker at the 2017 Annual Dinner of the King’s College Old Boys’ Association (KCOBA) at King’s College, Lagos, on Saturday.

In a speech titled “A New Nigeria Or A Better One: The Fitting Tools Of A Great Repair”, the former governor urged separatist groups to desist from attempts to separate Nigeria into smaller units, reinstating his quest is for a better Nigeria.

According to him, call for division would make the nation more vulnerable to outside influences, and its people would forfeit their rightful place on the world stage and as a leader of the continent.

“Moreover,” he explained, “not every split solves a problem. The political mentality, either good or bad, that defined a group before the split will remain after the divide. If one is imbued with factionalism, that perspective will remain even when the immediate problem is surmounted. Division will manifest differently, but manifest it will.

“A new factional bigotry will arise to replace the old. The cycle of tension and unrest will take its inexorable toll. Just ask the people of South Sudan if their woes ended when they left Sudan.

“When your heart is geared toward division, you will seek it within a single tribe, even a single family. The gossamer of ethnic unity will be ripped apart by sub-ethnic squabble. An angry man outside his home remains angry inside it as well and a thief steals from both stranger and friend.

“Driven by such a mentality, even someone you once called your brother becomes a nuisance, then a burden, and ultimately your enemy in short order.

“Thus, I oppose talk of break-up and all other exotic political arrangements tantamount to it.”

The politician, represented at the event by former Lagos State commissioner for Finance, Wale Edun, said while nations more powerful and developed than Nigeria seek to pool their wealth and might, some Nigerians are seeking to whittle the nation into smaller pieces.

“In one way or another, we all have felt the sting of man’s capacity to wrong his fellow man. But we are also endowed with the God-given spirit to overcome adversity and to make of old enemies, new allies and even brothers. I stand before you as a faithful believer in sentiments such as these”, he said.

“Collectively and individually you have contributed mightily to this nation. If there were more people imbued with the values of King’s College, Nigeria would be a better place. We must clearly articulate our objectives. That which we cannot think clearly, will not be attained despite the magnitude of our exertions and expenditure to achieve it. One cannot be assured that an architect’s fine design will result in a fine building. Much can go awry during the process of transforming idea into brick and mortar.

“However, we can be certain that a masterful building is never the result of flawed design.
In this vein, I dabble not so much in the search for a new Nigeria. I am equally not enthused about the flaws of old Nigeria. What I seek is a better Nigeria.

“I care not whether something is old or new but whether it shall make us better. Not all change is good. Not every new thing shall be kind to us.”

The former governor argued that Nigerians must learn new things on one hand and remember vital old wisdom on the other, saying the need for change should not be stifled.

“We are told to be practical, to accept the way things are. There is no struggle over competing ideals; we are told the current political economy is immutable,” he said.

“The only thing that matters is whether you master its dynamics to succeed or you sink and fail. To attempt to change things is as futile as trying to change the sky and clouds themselves.

“This is a blatant lie. Change is possible and change we must. There is no such thing as having no ideology. Every political and economic institutions are founded on one thought system or another. To accept the false premise that there is no alternative to how things are is to acquiesce in the unfair ideology that has brought us to our current predicament.”

He explained that since there is no one objective optimal standard by which to construct a political economy, it would seem prudent for a nation to dedicate a healthy amount of time discussing the fundamental matter of restructuring because, according to him, such is the surest path to reaching consensus on what economic development and good governance mean in Nigerian context.

“Sadly, the obverse is true. We talk little about this core issue. Instead, we spend inordinate time bickering over the symptoms of our failure to discuss the core issue,” he noted.

Mr. Tinubu, whose defunct Action Congress of Nigeria, ACN, clamoured for restructuring, said that the nation must listen to what is being said by all dissenting groups to understand what is being meant.

“If over the years, government had delivered on the promise of growth, prosperity, and justice, those calling for such extreme remedies would be but a small fringe of little
consequence. Our task is not to condemn but to listen and understand,” he said.

“I care not at all for this proposed solution. But I dare not discount the concerns and problems that have led many people into advocating such a thing.

“Here, I want to plainly state my position. I am a firm believer in Nigeria. I believe this land will become a great nation and a leader among other African nations. We can resolve our dysfunctions in a manner that will make this nation rise as a standard of decency, justice and prosperity for all Nigerians.”

Mr. Tinubu argued that separating the nation into small pieces resolves nothing and creates additional problems.

“The world marches toward integration. Europe, America, Asia seek trade and commercial pacts that will make them more integrated markets. Notwithstanding Brexit, the EU grows more integrated in the functions of governance by the day.”

He, however, explained that there is urgent need to ‘repair’ the nation.

“That I am a foe of disunity does not mean I have blinded myself to the truth that our nation is in need of great repair,” he said.

“We need a better Nigeria and we must move toward it with speed. Once an ally, time no longer is on our side.

“To achieve this better place means some old things must change. But it also means that we must revive some practices we have tried to forget.”

Mr. Tinubu lamented that even at the best of times and with the highest of oil prices, the economy was characterised by imbalance and inefficiency, saying widespread poverty, gross inequality and massive unemployment described the people’s condition.

He urged the nation to harness its population by creating an industrial capacity that employs large numbers of people and manufactures a significant quantity of goods for domestic consumption or export.

Similarly, the APC chieftain noted that Nigeria must press forward with a national industrial policy fostering development of strategic industries that create jobs as well as spur further economic growth.

He also opined that the federal government should institute a policy of tax credits, subsidies and insulate critical sectors from the negative impact of imports.

Asiwaju Tinubu also said that Nigeria must overcome the economic, political and bureaucratic bottlenecks preventing it from achieving reliable electrical power, saying it is perhaps the single greatest impediment to economic advancement.

Similarly, he said the CBN must cure its affection for high interest rates, saying consumer credit must also be more accessible to the average person.

On agriculture, he said the nation must help the common farmer practice as best done via ensuring minimum prices for crops strategic to food security. 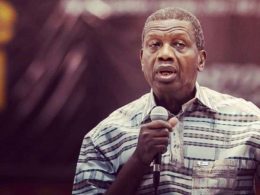 Pastor Adeboye to transgenders: God is not confused, repent

The General Overseer of the Redeemed Christian Church of God, Pastor E. A. Adeboye, has urged transgenders to repent, stating that God is not the author of confusion.
byTayo Aderinola
No comments